August is upon us and for fun I decided to look up the meaning
of this month. “August is both a given name and surname
developed from the Latin, Augustus. Derived from the Latin
word augere, meaning “to increase,” Augustus had the
meaning “esteemed” or “venerable” and was a title given to
Roman emperors. I like the idea of increase and it is my hope
we can increase knowledge about what NOW is up to and
helping to raise our esteem along with sharing wisdom
together.
To accomplish that I hope to see all of you at our summer
gathering, on Saturday August 11 from 1-4pm at the Howarth
Park Gazebo in Santa Rosa. It is my hope by gathering
and meeting and talking with one another folks will become
more involved in the organization along with seeing we are not
alone in this time when so much is on the line for women and
their right to chose. Please bring a guest.

Last month I reported that staff support was being cut from
the Commission on the Status of Women and the Human
Rights Commission and I have not heard anything of late.
Please watch for Letter to the Editor in the Press Democrat and
I want to encourage you to call your supervisor and let them
know your thoughts.

Also please email me at Elaine@womensspaces.com if you have any questions, concerns
or need to find out ways to get involved with our chapter.

“True community is based on upon equality, mutuality, and reciprocity. It affirms the richness of individual diversity as well as the common human ties that bind us together.”  — Rev. Dr. Pauli Murray, an American civil rights activist, women’s rights activist, lawyer, Episcopal priest, and author. Drawn to the ministry, in 1977 Murray became the first black woman to be ordained as an Episcopal priest. As a lawyer Murray argued for civil rights and women’s rights. Murray served on the 1961–1963 Presidential Commission on the Status of Women, being appointed by John F. Kennedy and in 1966 she was a co-founder of the National Organization for Women. 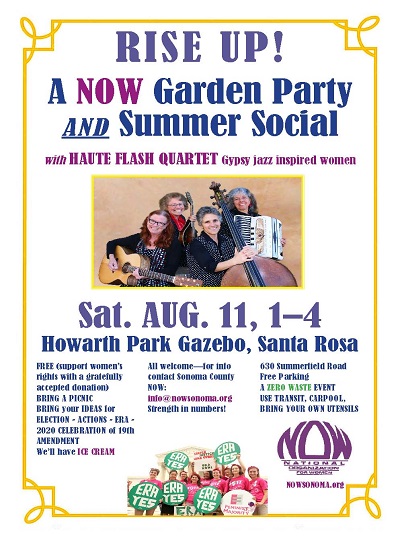